Pachycephalosaurus is a pachycephalosaurid. The type species, P. wyomingensis, is the only known species. It lived during the Late Cretaceous Period (Maastrichtian stage) of what is now North America. Remains have been excavated in Montana, South Dakota, and Wyoming. It was an herbivorous or omnivorous creature which is primarily known from a single skull and a few extremely thick skull roofs, though more complete fossils have been found in recent years. Pachycephalosaurus was one of the last non-avian dinosaurs before the Cretaceous–Paleogene extinction event. Another dinosaur, Tylosteus of western North America, has been synonymized with Pachycephalosaurus.

The thick skull domes of Pachycephalosaurus and related genera gave rise to the hypothesis that pachycephalosaurs used their skulls in intraspecific combat. This hypothesis has been disputed in recent years. 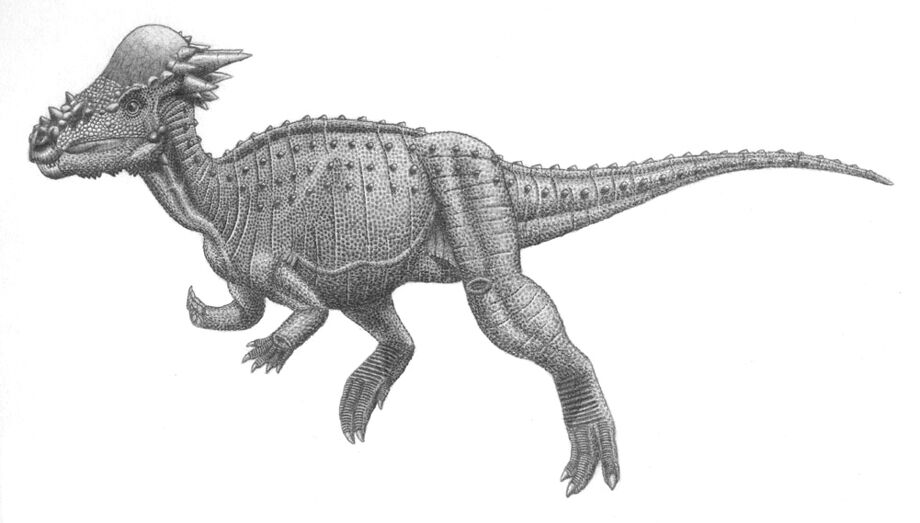 The anatomy of Pachycephalosaurus is poorly known, as only skull remains have been described.[1] Pachycephalosaurus is famous for having a large, bony dome atop its skull, up to 25 cm (10 in) thick, which safely cushioned its tiny brain. The dome's rear aspect was edged with bony knobs and short bony spikes projected upwards from the snout. The spikes were probably blunt, not sharp.[2]

The skull was short, and possessed large, rounded eye sockets that faced forward, suggesting that the animal had good vision and was capable of binocular vision. Pachycephalosaurus had a small muzzle which ended in a pointed beak. The teeth were tiny, with leaf-shaped crowns. The head was supported by an "S"- or "U"-shaped neck.[2]

Pachycephalosaurus gives its name to the Pachycephalosauria, a clade of herbivorous ornithischian ("bird hipped") dinosaurs which lived during the Late Cretaceous Period in North America and Asia. Despite their bipedal stance, they were likely more closely related to the ceratopsians than the ornithopods.[5]

Below is a cladogram modified from Evans et al., 2013.

Community content is available under CC-BY-SA unless otherwise noted.
Advertisement