This article is in need of attention from an expert on the subject. Please help recruit one or improve this article yourself. See the talk page for details.

Pathological shark teeth are developmental abnormalities commonly found in the shark tooth fossil record that may be caused by a variety of reasons: genetic mutation, damaged or immature teeth. Pathological teeth develop with distorted or disfigured crowns, and collectors usually have little or no trouble recognizing them. However, not all pathological teeth are easy to identify, and several species have been described on the basis of abnormal teeth. Due to the sheer quantity of teeth produced over the eons by sharks, many fossilized shark teeth reflects a 'pathological' condition.

Over the years, certain natural 'abnormalities' have been deemed pathologies. The best example might be Gudger (1933) who attributed certain tooth variations in rays to pathologies, when they were merely the natural manifestation of file splitting.

Unlike 'file splitting', tooth germs may be injured thus creating abnormal teeth. These pathologies are likely to continue over time, showing their presence in the tooth-band. The accompanying image of a Southern Stingray reflects germ damage which could be associated with a fish hook injury. Despite the obvious deformities of these teeth, it could be difficult to distinguish these teeth if represented by a isolated fossil tooth.

There are undoubtedly various other conditions, which can result in pathological teeth, however no attempt will be made expand upon this point. It should be noted that a tooth band may reflect an abnormality not observable in a fossil tooth. The Bourdon collection has a Galeorhinus with two reversed files (adjoining) and Gordon Hubbell advised that he's seen this phenomenon a couple times. In one case, it was the fourth or fifth file of a Tiger Shark that had reversed teeth.

It is well known that teeth from a particular file position can vary to some degree based on sex, age, region and between individuals. The symphyseal region seems particularly prone to producing multiple 'morphologies'.

In the case of teeth that resemble the symphyseal designs, seeing the actual dentition might be required to determine if certain specimens are the result of a pathology or merely an unusual variation of a file position.

Occasionally, shark teeth are found that display strange looking flat, polished, or angular crown faces. These features are called wear facets, and are caused by abrasion or rubbing of one tooth against another. Wear facets are features commonly found in sharks and rays, as they have crushing dentitions. They are found on many Texas Cretaceous teeth and are especially common in some hybodont sharks, including Lissodus, Polyacrodus, and Ptychodus, as well as many rays.

"Hubbell teeth" are juvenile Carcharocles megalodon teeth from the Bone Valley phosphate of Florida. These heart-shaped teeth, often with root and cusp abnormalities, are sometimes referred to as "Hubbell teeth" after Gordon Hubbell.

A commonly accepted theory is that all Hubbell teeth, by definition, are deformed, probably as a result of nutritional deficiency as young sharks. The large majority of juvenile megalodon teeth are normal, miniatures more or less of the adult teeth.

There is some lag time involved between the deformation as a germ tooth and its development and deployment as a useful (though deformed) tooth. A nutritional deficiency could occur shortly after birth, resulting in Hubbell teeth weeks or months later.

The disorder that affects a small proportion of these juvenile sharks may arise from an ultimately fatal genetic problem (they don't eat enough because there is a birth defect). Or, it may be something that these young sharks survive when they find sufficient prey items (they stop producing deformed teeth when nutrition is adequate). For one reason or the other, we don't find large Hubbell teeth. 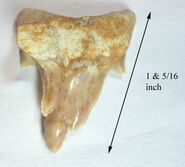 Pathological O. obliquus. Side photo.
Add a photo to this gallery

Extremely distorted Carcharocles sokolovi from Dixie County, FL.
Add a photo to this gallery
Retrieved from "https://fossil.fandom.com/wiki/Pathological_shark_teeth?oldid=7183"
Community content is available under CC-BY-SA unless otherwise noted.