Triceratops is a genus of herbivorous ceratopsid dinosaur which lived during the late Maastrichtian stage of the Late Cretaceous Period, around 70 to 65 million years ago (mya) in what is now North America. It was one of the last dinosaur genera to appear before the great Cretaceous–Tertiary extinction event.[1] Bearing a large bony frill and three horns on its large four-legged body, and conjuring similarities with the modern rhinoceros, Triceratops is one of the most recognizable of all dinosaurs. Although it shared the landscape with and was preyed upon by the fearsome Tyrannosaurus,[2] it is unclear whether the two battled the way they are commonly depicted in movies, children's dinosaur books and many cartoons.

A complete Triceratops skeleton has yet to be found;[3] however, the animal is well-known from numerous partial remains collected since the introduction of the genus in 1887. The function of their frills and three distinctive facial horns has long inspired debate. Although traditionally viewed as defensive weapons against predators, the latest theories claim that it is more probable that these features were used in courtship and dominance displays, much like the antlers and horns of modern reindeer, mountain goats, or rhinoceros beetles.[4]

Triceratops is the best-known of the ceratopsids, though the genus's exact placement within the group has been a point of contention amongst paleontologists. Two species, T. horridus and T. prorsus, are considered valid, although many other species have been named. 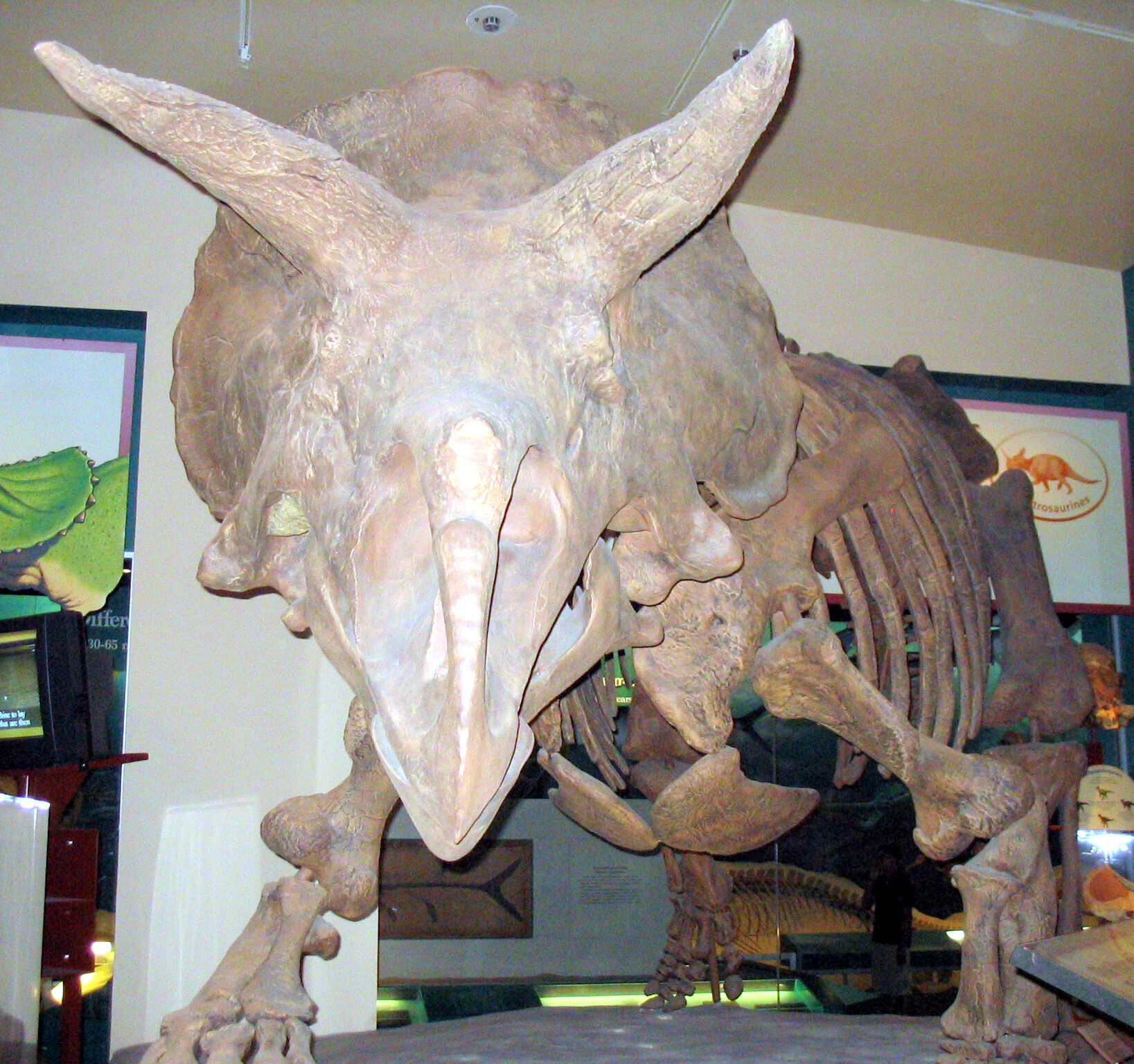 The skin of Triceratops was unusual compared to other dinosaurs. Skin impressions from an as-yet undescribed specimen show that some species may have been covered in bristle-like structures, similar to the more primitive ceratopsian Psittacosaurus.

Triceratops species possessed a sturdy build, with strong limbs, short hands with three hooves each, and short feet with four hooves each.[10] Although certainly quadrupedal, the posture of these dinosaurs has long been the subject of some debate. Originally, it was believed that the front legs of the animal had to be sprawling at angles from the thorax, in order to better bear the weight of the head.[13] This stance can be seen in paintings by Charles Knight and Rudolph Zallinger. Ichnological evidence in the form of trackways from horned dinosaurs, and recent reconstructions of skeletons (both physical and digital) seem to show that Triceratops and other ceratopsids maintained an upright stance during normal locomotion, with the elbows flexed and slightly bowed out, in an intermediate state between fully upright and fully sprawling (as in the modern rhinoceros).[10][20][21][22]

The hands and forearms of Triceratops retained a fairly primitive structure compared to other quadrupedal dinosaurs such as thyreophorans and many sauropods. In those two groups, the forelimbs of quadrupedal species were usually rotated so that the hands faced forward with palms backward ("pronated") as the animals walked. Triceratops, like other ceratopsians and the related quadrupedal ornithopods, walked with most of their fingers pointing out and away from the body, the primitive condition for dinosaurs also retained by bipedal forms like the theropods. In Triceratops, the weight of the body was carried by only the first three fingers of the hand, while digits 4 and 5 were vestigial and lacked claws or hooves.[10] The phalangeal formula is 2-3-4-3-1, meaning that the innermost finger of the forelimb has two bones, the next has three, etc.

Triceratops is the best known genus of the Ceratopsidae, a family of large North American horned dinosaurs. The exact location of Triceratops among the ceratopsians has been debated over the years. Confusion stemmed mainly from the combination of short, solid frills (similar to that of Centrosaurinae), and the long brow horns (more akin to Ceratopsinae, also known as Chasmosaurinae).[24] In the first overview of horned dinosaurs, R. S. Lull hypothesized two lineages, one of Monoclonius and Centrosaurus leading to Triceratops, the other with Ceratops and Torosaurus, making Triceratops a centrosaurine as the group is understood today.[25] Later revisions supported this view, formally describing the first, short-frilled group as Centrosaurinae (including Triceratops), and the second, long-frilled group as Chasmosaurinae.[26][27]

In 1949, C. M. Sternberg was the first to question this and favoured instead that Triceratops was more closely related to Arrhinoceratops and Chasmosaurus based on skull and horn features, making Triceratops a ceratopsine (chasmosaurine of his usage) genus.[28] He was largely ignored, with John Ostrom,[29] and later David Norman both placing Triceratops within Centrosaurinae.[30]

Subsequent discoveries and analyses upheld Sternberg's view on the position of Triceratops, with Lehman defining both subfamilies in 1990 and diagnosing Triceratops as ceratopsine (chasmosaurine of his usage) on the basis of several morphological features. In fact, it fits well into the ceratopsine subfamily, apart from its one feature of a shortened frill.[31] Further research by Peter Dodson, including a 1990 cladistic analysis[32] and a 1993 study using RFTRA (resistant-fit theta-rho analysis),[33] a morphometric technique which systematically measures similarities in skull shape, reinforces Triceratops placement in the ceratopsine subfamily.

In phylogenetic taxonomy, the genus has been used as a reference point in the definition of Dinosauria; Dinosaurs have been designated as all descendants of the most recent common ancestor of Triceratops and Neornithes (i.e. modern birds).[35] Furthermore, the bird-hipped dinosaurs, Ornithischia, have been designated as all dinosaurs with a more recent common ancestor to Triceratops than modern birds.

For many years after its discovery the evolutionary origins of Triceratops remained largely obscure. In 1922 the newly discovered Protoceratops was seen as its ancestor by Henry Fairfield Osborn,[13] but many decades passed before additional findings came to light. Recent years have been fruitful for the discovery of several dinosaurs related to ancestors of Triceratops. Zuniceratops, the earliest known ceratopsian with brow horns, was described in the late 1990s, and Yinlong, the first known Jurassic ceratopsian, in 2005.

These new finds have been vital in illustrating the origins of horned dinosaurs in general, suggesting an Asian origin in the Jurassic, and the appearance of truly horned ceratopsians by the beginning of the late Cretaceous in North America.[37] As Triceratops is increasingly shown to be a member of the long-frilled Ceratopsinae subfamily, a likely ancestor may have resembled Chasmosaurus, which thrived some 5 million years earlier.

This article is a stub. You can help Fossil Wiki by expanding it.

Community content is available under CC-BY-SA unless otherwise noted.
Advertisement